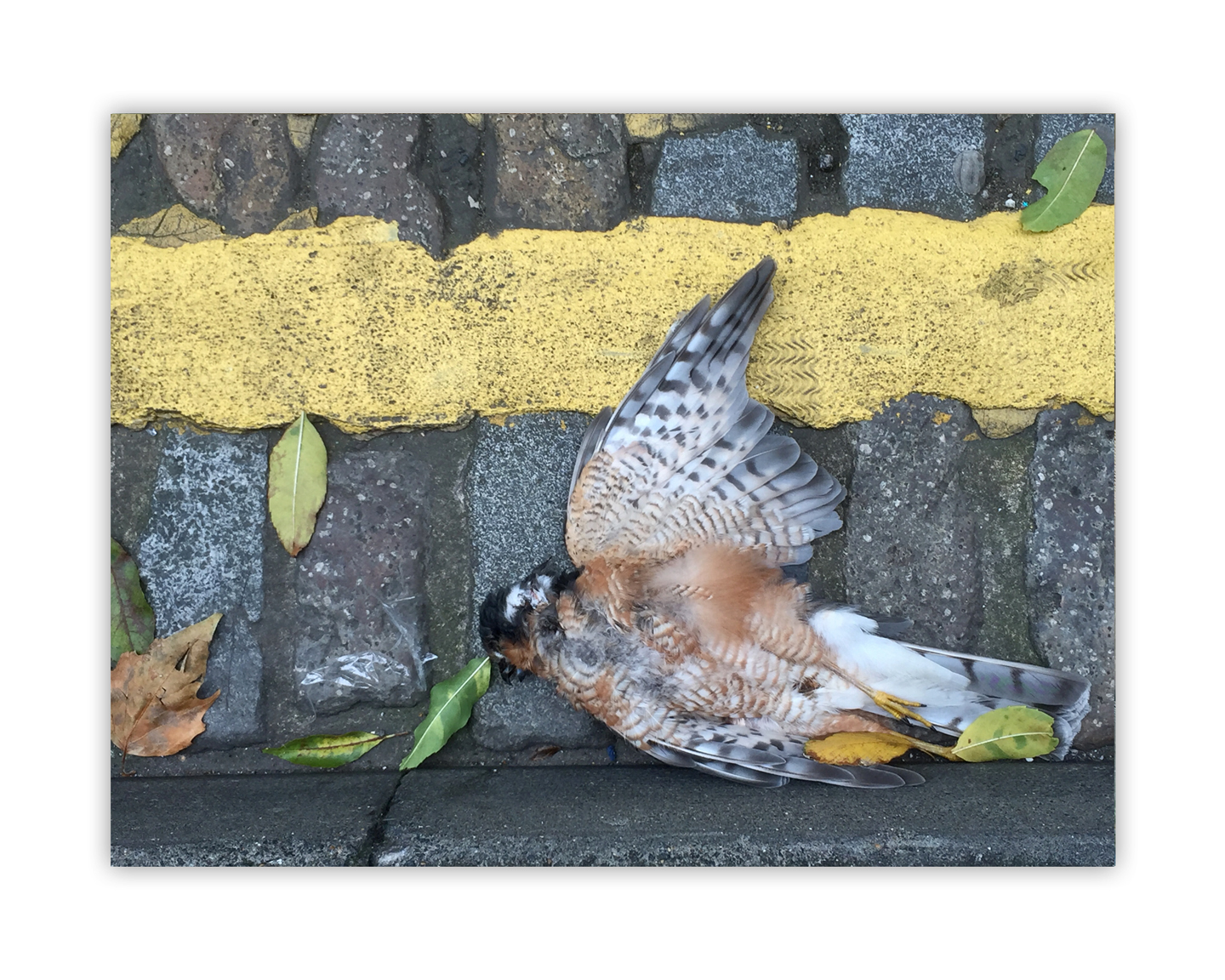 Finding it was a surprise. As I strode up the street I could see someone hovering over it in the distance.

A pause – an unusual one – in their day.

A road casualty of a kind.

I naturally expected it to be a pigeon, flocks of these busy birds being prevalent all around the city. It was only when I stood over it that I realised it was a beautiful dead male sparrowhawk.

I tried to make sense of how it was here, lying by the path edge. The street is a side street really, and is only busy with people walking through, and large trundling delivery trucks taking goods to a department store’s warehouse. However, it’s also beside St. John’s Church, the oldest church in Leeds: Gothic in style and built in the seventeenth century, the church and graveyard rise high above the street, surrounded by tall old trees and shrubbery. A rare pocket of green space in Leeds’ sprawling centre. So perhaps the bird had started out in there, and had launched itself at a gathering of smaller ones – sparrows perhaps in the trees which gather at the cafe next door, and had – in the fury of its chase – flown into the path of a van.

A few tiny feathers from another bird wafted on one of its feet.

I’d recently finished working on a project commemorating the death of World War One Leeds soldier George Edwin Ellison. The parallel pathos of this bird of prey’s untimely death struck me.

Two years ago sparrowhawks started hunting in the street where I live. I’d seen one fly purposefully into the centre of a holly tree in my garden, presumably intent on catching a sparrow. No concerns for its safety at all! A flash of darkness, a scuffle in the spiked leaves, then it was gone. A few weeks earlier a goldfinch had flown over my head as I walked along the pavement, and there – heading straight at me – was one focused sparrowhawk arrowing after it. It was thrilling. Far too fast for me to see if it caught the finch.

So I have seen the intensity of their hunts.

Having done my shopping I passed this one again, lying in the gutter, and this time I stopped and made some photographs. The beauty of its feathers astonished me. It was relatively unscathed. Aside from a broken neck there were no obvious injuries. I was torn about leaving it there in the road. It was mid-afternoon and schoolchildren would soon be passing through the street on their way home through the city – children who might feel drawn to ‘mess with it’.

So torn was I that having got on the bus and travelled all the way home, all the while thinking about the opportunity to see it up close – I decided I had to go back to ‘rescue it’ and bring it home. For closer examination and a proper burial. Friends I mentioned it to encouraged me. It was a rare find.

Growing up in a rural place I’m not squeamish about death, and like many kids I’ve buried many a dead blackbird, sparrow, mouse, and deceased pet in the back garden when I was little. I see dead creatures out on my walks in nature.

So this is what I did. ‘Nisus’ is the study of that sparrowhawk. Images were made outdoors, in dappling sunlight, with a light breeze ruffling the feathers. I wanted to see the bird in natural outdoor conditions, giving some animation to the plumage on its still body. You can see the pictures I am working on by clicking the picture below.

– I am planning to make a series of prints in memory of this beautiful bird. –