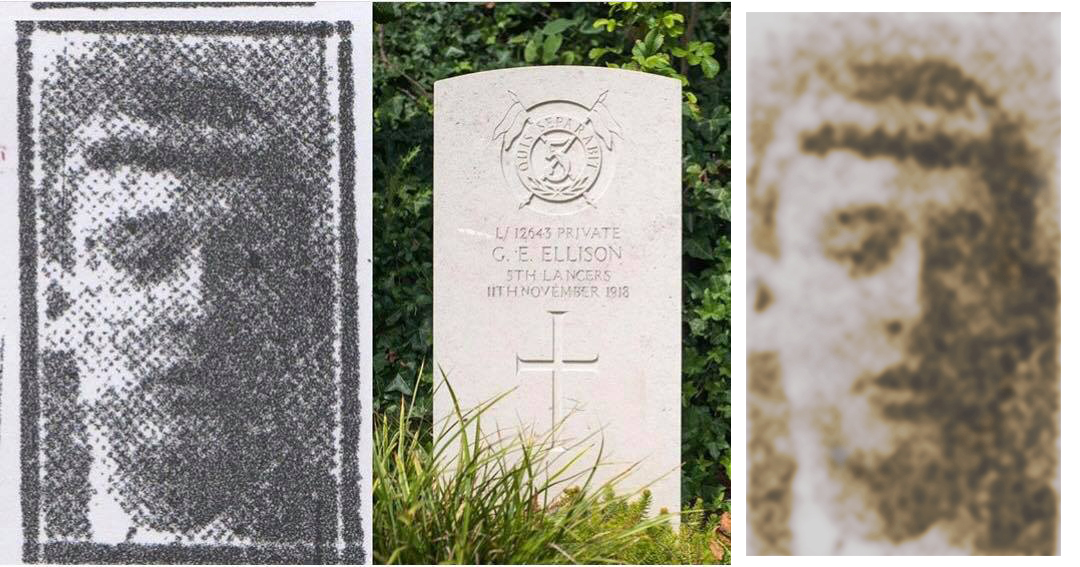 George Edwin Ellison was a coal miner, a husband, and a father, and lived in the Bank area – aka Richmond Hill – in Leeds. He was born in York in August 1878. According to official records George was the last British soldier to be killed in action in the First World War.

He was 36-years-old at the outbreak of war and was there from the start fighting with the 5th Royal Irish Lancers.

He saw his comrades injured and killed in Ypres and on the Somme, he fought in the first gas attack but he survived until the very last day.

On the morning of 11 November 1918, just after 5am, British, French and German officials gathered to sign a document which would bring an end to WW1. And yet the ceasefire would not come into effect until six hours later so that troops on the frontline would be sure of getting the news that the fighting had stopped.

That same morning Private Ellison of the 5th Royal Irish Lancers was scouting the outskirts of the Belgian town of Mons, where German soldiers had been reported in a wood.

At 9.30am a shot rang out: George was shot dead by a sniper.

He left a wife Hannah and a 4-year-old son, James Cornelius – who turned 5 a few days after George’s death.

George’s brother Frederick had also been killed in the war one year earlier, when the minesweeping ship he was working on was attacked and subsequently sank in the English Channel. Both men were 40 years of age when they died.

This month I have been working with Ed Carlisle, Lucy Moore, James Rhodes and Leeds Civic Trust to create a plaque to remember George Ellison – and through him, to also recognise all the regular Leeds people, from all walks of life, who served and who lost their lives in that war.

We unveiled the plaque commemorating George at Leeds City railway station on Wednesday 7th November 2018 – to mark the hundredth anniversary of the end of the war, and George’s death.

It has been a wonderful project to be involved with, during which I have learnt a good deal about Leeds’ experiences of and contribution to WW1, in addition to meeting many of George’s surviving relatives – his grandaughters, great grandchildren, and great great grandchildren. It’s been a privilege to help mark his memory and ensure that he is remembered here in Leeds. ITV News covered the unveiling here: Plaque unveiled at Leeds Station in memory of last soldier killed during WW1.

Above you see my rough attempt to ‘revive’ George the man from out of his only surviving photograph. No bigger than a postage stamp, it is rather a challenge to work with a few specks of inked newsprint to try to recreate a ‘living portrait’. Many more people will attempt to do so in the future, I’m sure.

In addition to the plaque we also created a mocked up 1918 newspaper, to tell something of George’s story, and raise awareness of the project and the plaque. These were handed out during rush hour in the busy city station that day. Writer Philip Parker’s moving centena poem ‘Goodnight Kiss’ made for a poignant addition. It is written in the voice of John Parr: Parr was the first British soldier to be killed in the war, and it is curious that his grave faces that of George Ellison – just ‘five strides apart’. Tens of thousands of deaths lie between them in terms of time.

I have never been to a cenotaph gathering on Remembrance Day before. This year I found myself compelled to go, in memory of George.

George Edwin Ellison 1878 – 1918. He is buried in Saint Symphorien military cemetery in Hainault, Belgium, close to Mons where he died.